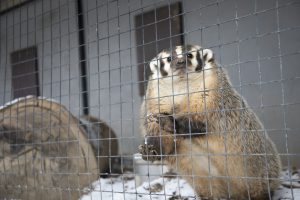 Sex: Female
Birthday: March 30, 2017
Ms. Todd is a rescued orphan North American badger. Zoo Idaho acquired Ms. Todd from Idaho Fish and Game who recovered the badger from Power County after the mother was hit by a car.

Not rare and apparently secure, but with cause for long-term concern

Badgers range from southern Canada to Mexico primarily in the Great Plains region. They are currently expanding their range east as a result of the clearing of land. Their habitat is variable including relatively dry open areas with little vegetation such as plains, prairies, dry grasslands, and cold deserts.

Males are slightly bigger than females.

The American badger has a flattened body with a thick neck and short legs. They have a distinct facial pattern; brown with two white cheek areas and a black triangular patch in front of the ears. There is a white stripe that runs from the nose to the neck or back. American badgers have shaggy fur that ranges from yellow-brown to silver gray dorsally and light cream to buff ventrally. Their skin is loose allowing it to turn around in small places such as burrows. The front feet are larger than the rear with longer backward curving claws specialized for digging.

Up to 14 years in the wild and over 20 years in captivity.

Female American badgers reach sexually maturity at four months with most mating after their first year. Males will not breed until at least their second year. Mating occurs between late summer and fall. The American badger is similar to bears with delayed implantation of the embryos, where once implanted gestation is six weeks. Litter size is between one to five and they are born in early spring.

Badgers are solitary nocturnal animals that occupy non-defended home ranges with males having slightly larger ranges than females. They are excellent diggers able to tunnel rapidly through all types of soil and hard substrates. Burrows are typically constructed in pursuit of prey and for sleeping. A badger den can be 10ft (3m) deep and have 33ft (10m) of tunnels. They use multiple burrows within their home range and during the summer may dig a new burrow each day. Badgers do not hibernate during winter months but go into torpor for periods of around 30 hours.