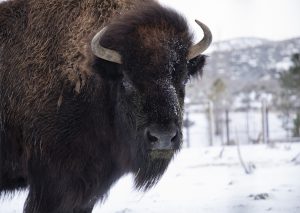 Birthday: April 17, 2009
Laverne is a captive-born bison donated to Zoo Idaho by the Shoshone-Bannock Tribes of Fort Hall, Idaho.

Historically the American bison extended from northern Mexico to Alaska with the plains bison (bison bison bison) ranging from Northern Mexico to central Alberta and the wood bison (bison bison athabascae) from central Alberta to Alaska. The current range is restricted by land use and wildlife management policies with the current population functioning as wild occupying less than 1.5% of their original range.

Bison are the largest land mammal in North American. Bison have long, thick, dark hair on the head, neck, and forelegs which becomes much shorter towards the rear part of the body. Both male and female bison have short, sharp, curved set of horns. Adult male bison will also have a black beard approximately one-foot long. The most distinctive features of the bison are their shoulder hump and huge head. Plains bison have a smaller more rounded hump compared to the wooded bison.

Bison are grazers feeding primarily on grass but they will eat flowering plants, lichens and occasionally leaves depending upon availability. During the winter bison will use their heads sweeping snow side to side to clear snow to access the grass below.

Bison live between 15-20 years in the wild and captivity.

Breeding season runs from late June through September. Breeding bull bison will defend a small group of chosen females. Females reach sexual maturity at two to three years of age and are seasonally polyestrus. Males reach maturity at age three however they generally do not breed until age six. Gestation lasts approximately 285 days with a single yellow-red calf born. Calves are nursed for seven to eight months and are completely weened by the end of the first year.

Bison are gregarious arranged in groups according to sex, age, season, and habitat. Dominance hierarchies occur within the multiple types of groupings. Cow groupings are composed of females, males under three years of age, and occasionally older males. Males are either solitary or in groups that can reach as large as 30 individuals. Both male and female dominance is linear with high ranking individuals breeding more often. Bison have an excellent sense of hearing and smell with poor vision. They communicate through grunts and snorts. Grazing occurs in loose groups during several periods each day, primarily in the morning and evening. Bison wallow, role in dust and mud, to keep cool and sooth/prevent insect bites.

During the 19th Century the bison was nearly eliminated throughout North America. Conservation measures including private commercial efforts have brought about a limited recovery. Threats to bison include habitat loss, loss of genetic exchangeability, genetic manipulation as part of the commercialization of preferred market traits, introduction of cattle hybrids, loss of the effects of natural selection, and depopulation as a result of management response to bison-cattle zoonotic disease crossover.