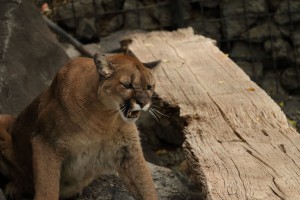 Sex: Female
Birthday: November 7, 2007
Orphaned in the wild. The zoo received her as a rehab non-release kitten in 2008. 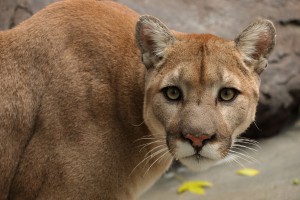 Sex: Male
Birthday: November 15, 2011
Orphaned in the wild. The zoo received him as a rehab non-releasable kitten in 2012.

The cougar historically, has the largest range of any large wild terrestrial mammal in the Western Hemisphere, extending from the Yukon in Canada to the southern Andes of South America. An adaptable, generalist species, the cougar is found in every major American habitat type including montane coniferous forests, lowland tropical forests, grassland, dry brush swamps and any area with adequate cover and prey.

Cougars are large, slender cats with short coarse fur ranging from yellow brown to gray brown. The belly, throat, chest and neck tend to be lighter and whitish. The eyes of mature animals are grayish brown to golden. The tail is long, cylindrical, and about one-third of the animal’s total length. The limbs are short and muscular, with broad feet and retractable claws.

Primary food sources include ungulates such as deer, elk, moose, and bighorn sheep, as well as domestic cattle, horses and sheep, particularly in the northern part of its range. It will also hunt species as small as insects and rodents.

Mountain lions may live up to 18 to 20 years in the wild. They can live slightly longer in captivity.

Females reach sexual maturity between one-and-a-half to three years of age. They typically average one litter every two to three years throughout their reproductive life, though the period can be as short as one year. Gestation is 82 to 96 days with litter size is between one and six cubs but more commonly two or three. Mating occurs throughout the year however in northern regions mating is concentrated between December thru March.

Cougars are solitary animals that live within home ranges marked by scat and urine. Cougars in northern regions will have summer and winter home ranges. They are primarily nocturnal. Cougars rely mainly on vision, smell, and hearing. They use low-pitched hisses, growls, purrs, yowls, and screams in different circumstances. Loud, chirping whistles by young serves to call the mother. Touch is important in social bonding between mothers and young.

Cougars are threatened by habitat loss and fragmentation and poaching of their wild prey base. They are also persecuted across their range due livestock depredation and fear that they pose a threat to human life. Heavily travelled roads pose a major barrier to cougar movements and dispersal.