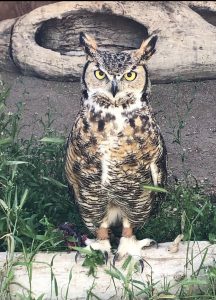 Sex: Female
Birthday: April 10, 2014
The zoo received Whodini in April 2014 after she was found on the ground as a hatchling, and the nest could not be relocated.

The great horned owl is found throughout the forests of North, Central and South America, from the arctic regions in the north to the Straits of Magellan in the south. Great horned owls prefer dense woodlands of hardwoods and conifers, cliffs and rocky canyons and in forest openings. In general they inhabit unsettled areas.

Great horned owls are sexually dimorphic, that is there is a clear distinction between male and females. Females are 10-20% larger than males.

Great horned owls are large and thick bodied with two prominent feathered tufts on their head. They are mottled gray-brown with a reddish brown facial disk and large yellow eyes. The flight and tail feathers are distinctly barred dark and light. The throat is whitish and inflated when calling. The talons are densely feather with dark claws.

Great horned owls reach sexual maturity at two years of age. The courtship usually begins in late January or early February which includes hooting, bowing to each other with drooped wings, mutual bill rubbing and preening. Owls do not build nests but use the abandoned nest of another bird, usually a hawk or crow. The great horned owl raise one family per year with two to four eggs laid and incubated for 26–35 days. The male and the female will both incubate the eggs. At six to seven weeks young start roaming from the nest and begin to fly at nine to ten weeks old. Juveniles leave the nest in the autumn.

Great horned owls are solitary except during nesting and do not migrate. They maintain territories with an average home range of approximately 1.5 square miles. Great horned owls communicate by hooting which is primarily used to establish territory limits. The owls will respond to intruders and threats with bill-clapping, hisses, screams and guttural noises. If the threat escalates they will spread their wings and strike with their feet. Great horned owls are primarily nocturnal, hunting at night but they have been known to hunt during the day especially in the winter months.

Great horned owls are one of the most widespread and successful raptors in the United States. At this time they do not appear to have any major threats.