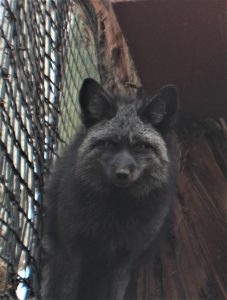 Sex: Male
Birthday: April 4, 2006
Beethoven is a dark phase red fox that was rescued by Zoo Idaho after being picked up by Idaho Fish and Game. He is deaf and usually spends his time hiding in the dens on exhibit.

Sex: Male
Birthday: May 5, 2017
Michael J Fox was rescued as a kit and brought to the Pocatello Animal Shelter. After being assets by Idaho Fish and Game, he was categorized as a non-releasable orphan and transferred to Zoo Idaho. Michael J Fox can usually be found hanging out in the trees on exhibit. 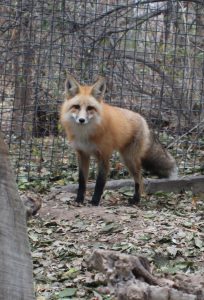 Sex: Female
Birthday: August 15, 2018
Lady M. was rescued by Idaho Fish and Game after being caught in a barbed wire fence. Her right rear leg was severely injured and needed to be amputated, therefore, she is categorized as non-releasable. Lady M. has recovered well and joined the exhibit in 2020. You can frequently see her running about on exhibit.

The red fox has the widest distribution of any canid found throughout much of the northern hemisphere from the Arctic Circle to Central America. They occupy a wide range of habitat including forest, tundra, prairie, desert, mountains, farmlands, and urban areas. Red fox however prefer mixed vegetation communities such as edge habitats, mixed scrub, and woodland areas.

Red fox are the largest of the Vulpes species. Coloration ranges from pale yellowish red to deep reddish brown dorsally to white or ashy on the ventral side. The lower part of the legs is usually black and the tail has a white or black tip. Two color variants commonly occur. Cross foxes have reddish brown fur with a black stripe down the back and another across the shoulders. Silver foxes range from strong silver to nearly black and are the most prized by furriers. These variants are about 25% and 10% of red fox individuals, respectively.

Red fox may live up to three years in the wild and 10-12 years in captivity.

Red fox mating behavior varies substantially. Often males and females are monogamous, but males with multiple female mates are also known, as are male/female pairs that use non-breeding female helpers in raising their young. Females mated to the same male fox may share a den. Red fox groups always have only one breeding male, but that male may also seek mating outside of the group. Breeding season depending on location varies from December-April. Gestation is 49-55 days with 1-9 kits being born. Kits are weened between 56-70 days and reach sexual maturity by 10 months of age.

Red foxes are solitary animals that do not form packs like wolves. They are partially territorial with adjacent ranges overlapping somewhat and other areas within the range regularly defended. Individuals and family groups live in dens which are usually old rabbit, marmot, woodchuck burrows. The same den is often used over a number of generations. Red foxes are terrestrial and either nocturnal or crepuscular (active during dawn and dusk).

Threats are highly localized and include habitat fragmentation and degradation, exploitation, and persecution.