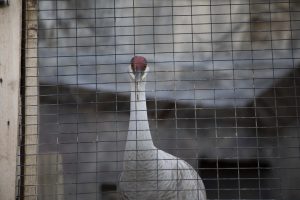 Sex: Unknown
Birthday: May 2007
Gandalf the Gray came to call Zoo Idaho home after he was acquired by US Fish and Wildlife. Gandalf’s behavior suggests that he was hand-raised and imprinted. Gandalf was removed from the wild because he was approaching people and deemed a non-releasable sandhill crane. Gandalf is always excited to greet people and is a great ambassador for his species.

Rare or uncommon but not imperiled, breeding population

Sandhill cranes are large, tall birds with long legs and neck, and broad wings. The head is small with a long straight bill. They are slate gray birds with a rusty wash on the upper wings and “bustle,” drooping feathers covering the tail. Adults have white cheeks with a red crown. Sub-adults are gray and rusty brown without the adult coloration.

21 years in the wild and slightly longer in captivity.

Sandhill cranes are monogamous with pairs remaining together from year to year. Breeding pairs form during spring migration and are maintained by performing courtship displays, remaining in close proximity, and calling together in unison. Five courtship displays have been identified: upright wing stretch, horizontal head pump, bow, vertical leap, and vertical toss. Three additional displays are used exclusively by paired adults: bill up, copulation, and unison call. Migratory sandhill cranes begin to lay eggs early April-May while non-migratory cranes may begin as early as December and as late as August. They will raise one brood per year while laying one – three eggs with two being common. Both parents are active in the incubating and rearing of the chicks. Incubation lasts 29-32 days and the chicks reach independence in nine to ten months. The sub-adults form independent flocks with other sub-adults and non-breeders. Sandhill cranes begin to breed between two to seven years of age.

Cranes are typically found in pairs or family groups. During migration and on wintering grounds (northern populations) groups will join with non-mated cranes to form extremely large flocks, into the tens of thousands. Sandhill cranes are diurnal.

Loss of wetland habitats, staging and overwintering areas, and urbanization.