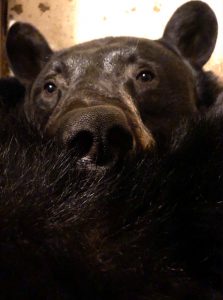 Sex: Male
Birthday: January 14, 2012
Roscoe was acquired from Idaho Fish and Game who obtained the bear cub from Snowdon Rehabbers in McCall, Idaho. Roscoe is a non-releasable orphan. 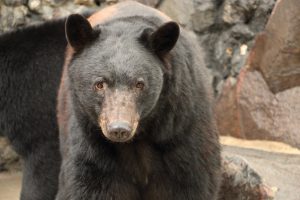 Sex: Male
Birthday: January 10, 2011
Copper was acquired from Idaho Fish and Game after they found him with his deceased mother in Payette National Forest.

Not rare and apparently secure, but with cause for long-term concern

Black bears are found from northern Alaska, nearly the entirety of Canada and The United States, and parts of central Mexico.

Black bear habitat is characterized by relatively inaccessible terrain, thick understory, and abundant sources of food in the form of shrub or tree-borne soft or hard mast. Black bears in Idaho prefer mixed deciduous-coniferous forests. They however occupy and use wet meadows, riparian areas, and subalpine ridgetops.

The black bear color is highly varied. The most common color is black with variations from brown, cinnamon and blonde in western populations. In Alaska and the Yukon there is a blue-gray color phase called a glacier bear and a white phase called Kermode in British Columbia. The color of an individual is uniformed with a lighter brown snout. Black bears are distinguished from brown bears by longer ears, small shoulder hump, and convex profile.

They are omnivores and primarily feed on a variety of plant products including fruits, berries, roots, sprouts, and nuts. A small portion of their diet consists carrion, insects, and beetles.

Up to 30 years in both the wild and captivity.

Female black bears reach sexual maturity between 2-9 years and males 3-4 years. Both male and female bears have home ranges with a male’s range overlapping several females. Mating season is from May-July with males and females meeting temporarily to mate. Gestation is approximately 220 days which includes a delayed implantation. Births of 1-5 cubs occur January-February during hibernation. Cubs remain with the mother for 18 months at which point they forced out of her territory as the mother comes into estrus.

Black bears tend to be crepuscular (active during dawn and dusk) however they alter this pattern depending on environmental factors such as proximity to humans or brown bears. Black bears are normally solitary except for female family groups. In areas where the food supply is plentiful large numbers of bears congregate forming hierarchical groups. Black bears are excellent swimmers and climbers. They are along with the Asiatic black bear and sun bear the most arboreal of the bear species. Black bears are typically shy and secretive towards humans and exhibit a high levels of intelligence, curiosity, and exploratory behaviors. They communicate through body and facial expressions, sounds, touch, and scent marking.

There are no major threats throughout most of the black bear range with small isolated populations experiencing localized pressure. Increased human contact, roads, and habitat fragmentation tend to be the majority of threats for black bears.