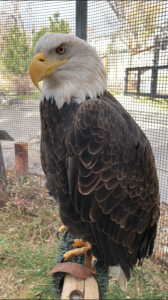 Sex: Female
Birthday: April 1, 2006
Acquired from Idaho Fish and Game from a falconer in Paris, Idaho. Valkyrie is a non-releasable eagle because she exhibited signs of imprinting when found.

Bald eagles are native to Canada, the United States, and portions of Mexico. They prefer areas near larger bodies of water such as sea coasts, coastal estuaries, inland lakes, and rivers. Habitat selection depends largely on the availability of tall trees and degree of human disturbance.

Bald eagles are large birds with characteristically yellow eyes, yellow bill, white heads and tails, and dark brown bodies. Females are slightly larger than males. Bald eagles go through four distinct maturation stages. At hatching they have dark eyes with pink legs and skin, and flesh colored talons with the skin darkening to a bluish hue and legs becoming yellow. Throughout year one the eyes and beaks are dark brown with underwing coverts white. During their second year the eyes lighten and the body remains mottled. In the third year the bill and eyes begin to turn yellow and the head feathers begin to lighten. The fourth year the bald eagles begin to take on the appearance of an adult bird with their body becoming mostly dark and the head and tail mostly white. In the fifth year the eagles have reached their adult coloration.

Bald eagles are monogamous and it is believed they mate for life. The pair separate during migration and when they reunite during breeding season they perform elaborate flight displays with each other. The displays include swooping at each other and a cart-wheel display where they clasp their feet in air, spinning as they plummet to earth, letting go before impact. Bald eagles begin breeding at five years. Both construct the nest and care for their offspring. Nests are typically reused for consecutive years, continually added to it each year. Bald eagles usually produce one brood with one to three eggs per season. Eggs are incubated for 35 days followed by an 11-12 week nesting period. Fledglings leave the nest between eight to 14 weeks old and may remain dependent up to 18 weeks.

Bald eagles tend to be solitary outside of the pair bonding during nesting. Groups of bald eagles may be seen where prey is plentiful and they may roost in large communal groups.