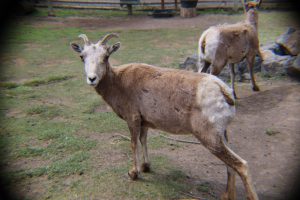 Sex: Female
Birthday: June 2015
Lamb Chop was retrieved along the Salmon River following the accidental death of its mother. Lamb Chop had a light limp of her left rear leg and was only 6-8 weeks old. Idaho Fish and Game transferred care of Lamb Chop to Zoo Idaho on July 13, 2015. She was determined to be a non-releasable orphan. 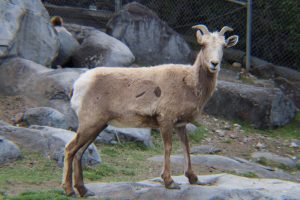 Sex: Female
Birthday: May 21, 2017
Princess Spicy was born in captivity at Zoo Idaho at 9 a.m. on May 21, 2017. She quickly adapted to life at the zoo and enjoys climbing on the rock ledge and other climbing structures in her habitat. 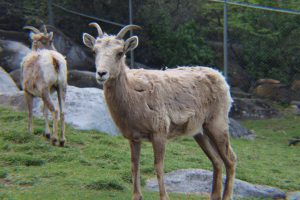 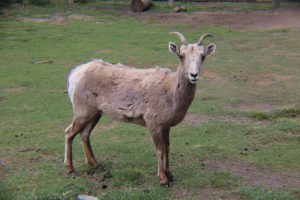 Sex: Female
Birthday: May 28, 2018
Kat and Linda were both captive born at Zoo Idaho on May 28, 2018. They are full of energy and are always messing around with their older sister Princess Spicy.

Imperiled because of rarity or because other factors demonstrably make it very vulnerable to extinction.

Bighorn sheep are found in the Rocky Mountains from southern Canada to Montana and Idaho south through Wyoming and northern Utah, Colorado and New Mexico. A desert subspecies is found in Nevada and California to west Texas and parts of Mexico. Bighorn sheep occupy alpine meadows, grassy mountain slopes, and foothill country that are close to rocky cliffs and bluffs. They require drier slopes with less annual snowfall due to their inability to paw through deep snow to feed.

Bighorn sheep have compact muscular bodies with chocolate brown fur with white on the muzzle, rump and belly. Rams have large curved horns while ewes have much smaller horns with a slight curve. Bighorn sheep outer hooves are modified toenails shaped to snag slight protrusions and a soft inner pad that provides grip as they are climbing steep terrain.

Bighorn sheep live between 15-20 years in the wild and captivity.

Breeding season (rutting) begins in the fall to early winter. Males (ram) do not defend a territory but fight for access to females. Rams participate in head-to-head combat by smashing into components at speeds of 20 miles per hour with their horns. Combat between two rams can last for 24 hours. Dominance is dependent on age and horn size and as a result males tend not to breed until age seven. Females (ewes) are polyestrous and will accept multiple rams during rut. In the wild ewes tend not to breed until age two or three. In captivity they have bred as early as one year. Gestation lasts from 150-180 days with one, rarely two, lamb(s) born. Lambs are precocial and able to follow their mother over rocky terrain around one week after birth. Lambs are weened by four to six months.

Bighorn sheep are gregarious typically forming groups of eight to ten and at times form herds of over 100 individuals. Females form family groups led by an older ewe while mature rams form bachelor groups. Young males typically leave the family group between two and four years to join the bachelor groups. Bighorn sheep undergo seasonal movements using upland areas in the summer and sheltered valleys in the winter. Bighorn sheep are good climbers using ledges as small as two inches wide. They can run on level ground as fast as 30 miles per hour and scramble up slopes at 15 miles per hour.