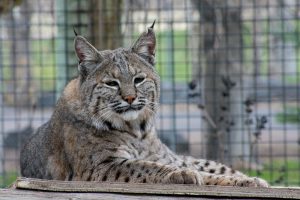 Sex: Male
Birthday: April 30, 2011
Buddy came to Zoo Idaho from Fund for Animals Wildlife Center in Ramona, Ca. Buddy is a non-releasable rescue and was transfer to Zoo Idaho June 30, 2014. 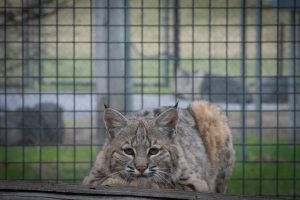 Sex: Female
Birthday: June 24, 2016
Rogue came to Zoo Idaho on July 14, 2016 as an extremely young kitten from Idaho Fish and Game. Rogue was found by a member of the public on the St. Anthony Sand Dunes and appeared to be orphaned.

Not rare, but with cause for long-term concern

Bobcats are found from central Mexico to southern Canada in a wide range of habitats including forests, semi-deserts, mountains, and brushland.

Bobcat fur varies from brown-black to red-brown with either distinct or faint black spots. They have short ear tufts and ruffs of fur on the sides of the head. The bobcat has long legs relative to its size and small feet compared to the more northern Canada lynx.

Bobcats may live up to 15 years in the wild and slightly longer in captivity.

Bobcats mate in spring where both males and females have multiple partners. Male bobcats do not help in rearing. Gestation is 60-70 days with an average litter size of three kittens. Kittens open their eyes at 10 days and nurse for two months. Young bobcats disperse at approximately eight months.

Habitat fragmentation and urbanization is the primary threat to bobcat populations. Increased deaths due to car collisions, accidental ingestion of rodenticide, and persecution as a result of a perceived pest.