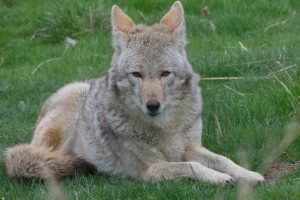 Coyotes are found throughout North and Central America from Panama, Mexico, the United States, and almost all of Canada except for the far north-east regions. Coyotes continue to expand their distribution and are occupying more areas not within their historic of the south-west and Great Plains of the United States and Canada. They are uncommon in areas with high gray wolf populations.

Coyotes are predominantly brownish gray with a lighter gray to cream colored belly. Color however varies greatly within individuals and populations. The tail is bottle shaped with a black tip; the ears are pointed, long and slender; and the feet are relatively small for body size.

Coyotes are omnivores that primarily eat small mammals such as rabbits and rodents. They do at times eat birds, snakes, insects, and other invertebrates. Fruits and vegetables tend to be significant components during the fall and winter months.

Coyotes may live up to 10 in the wild and 18 in captivity.

Both male and female coyotes reach sexual maturity between 9-12 months. Courtship occurs between January-March where the female chooses a mate. The female is monestrus and will be in heat 2-5 days. Gestation is 60-63 days with litter size ranging from 1-19 pups (six is average). The pups emerge from the den three weeks after birth and are weened around day 35. Both adults participate in the rearing of pups.

Coyotes tend to not form packs and hunt either individually, in pairs, or in family units depending on prey availability. They are nocturnal with occasional activity during daylight hours. Coyotes live in dens, typically enlarged burrows of badgers or woodchucks, year after year. Coyotes are one of the most vocal North American mammals using squeaks, howls, and distress calls to communicate between pack members and to announce territories.

There are no current threats.