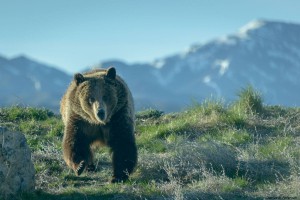 Sex: Female
Birthday: January 10, 2012
The zoo received Shoni in 2014 as a non-releasable nuisance bear from the Shoshone National Forest in Wyoming. Shoni’s estimated age at arrival was 2 years. 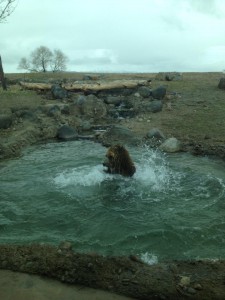 The brown bear is the most widely distributed bear. Historically the brown bear was found across a large portion of North America including northern Mexico, throughout Europe, Asia, the Middle East and North Africa. The grizzly bear, a subspecies of the brown bear ranges from Alaska through western Canada to isolated populations in Washington, Idaho, Montana and Wyoming. Grizzly bears prefer open, shrub communities, alpine and low elevation meadows and riparian areas.

Grizzly bears typically have dark brown fur but variation in color is common. The tips of most fur are lighter in color giving them a grizzled effect resulting in the grizzly name. All brown bears including grizzlies have a distinguishing shoulder hump. The hump is a mass of muscle that enables the bears to be exceptional diggers and provides significant strength in the front limbs. Brown bear claws are large, long, curved and blunt. Adults have massive, heavily built concave skulls, which are large in proportion to the body. The forehead is high and rises steeply. Brown bears have very strong teeth: the incisors are relatively big and the canine teeth are large, the lower ones being strongly curved.

They are omnivores and feed on a variety of plant products, including berries, roots, sprouts, fungi, as well as meat products such as fish, insects, and small mammals. Despite their reputation, most brown bears are not highly carnivorous, as they derive up to 90% of their dietary food energy from vegetable matter.

Mating season is from May through July with a peak in mid-June. Females mature sexually between the age of 3–8 years, while males usually mate a few years later when they are large and strong enough to successfully compete with other males for mating rights. Litter size will vary from one to four cubs with an average of two. Gestation is 180–270 including delayed implantation. Delayed implantation is when the fertilized embryo does not attach to the uterine wall until denning season. If the female does not gain sufficient weight or body fat the embryo will not attach. Cubs are born in late January into February and will remain with their mother for two to three years.

The brown bear is active throughout a 24-hour period. Bears change from nocturnal, diurnal and crepuscular activities depending on the time of year. In the winter bears become very lethargic. Although they are not full hibernators, and can be woken easily; both sexes like to den in a protected spot, such as a cave, crevice, or hollow log, during the winter months. Brown bears are mostly solitary, although they may gather in large numbers at major food sources and form social hierarchies based on age and size. Adult male bears are particularly aggressive and are avoided by adolescent and sub-adult males. Female bears with cubs rival adult males in aggression, and are more intolerant of other bears than single females.