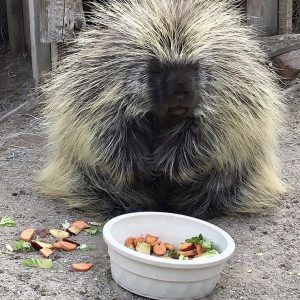 Porcupines use a broad variety of habitats. With an extensive range, they can be found in varied climates, and at varied elevations. Porcupines live in open tundra, deciduous forests, and desert chaparral. They are found throughout Canada and the western United States south to Mexico. Porcupines are also common from Wisconsin to New York and New England.

The North American porcupine is the second largest rodent in North America, outsized only by beavers. Individuals range in length from 24 to 36 inches, and weigh between 10 and 30 lbs. It is distinguished by its stout, slow, lumbering form and by its spiny coat. On the whole, porcupines appear dark brown to black, with dorsal guard hairs and quills that contain bands of yellow. Quills extend from head to tail on the dorsal surface. North American porcupines are sexually dimorphic, with males being larger than females.

Porcupines are generalists, eating a wide range of plant material depending upon season. In the spring/summer porcupines eat berries, seeds, grasses, leaves, roots, and stems. During the winter they primarily eat evergreen needles and tree bark.

Porcupines breed only once a year with males competing for pre-estrous females. A dominant male breeds with a number of different females, but only when the females are willing. Breeding occurs in October and November. Gestation is 210 days, after which a female gives birth to a single offspring. Newborns weigh between 14 and 18 oz. Young are nursed for about 127 days and become independent of their mothers at approximately 5 months of age, but are not sexual mature until the age of 25 months for females, and 29 months for males.

The North American porcupine is a solitary animal, although it may den with other porcupines in the winter. It makes its den in caves, decaying logs and hollow trees. The porcupine doesn’t hibernate, but it may stay in its den during bad weather. They are good swimmers with the hollow quills helping to keep it afloat. It is also an excellent tree-climber and spends much of its time in trees. It is a very vocal animal and has a wide-variety of calls including moans, grunts, coughs, wails, whines, shrieks and tooth clicking.

No major threats to the species.