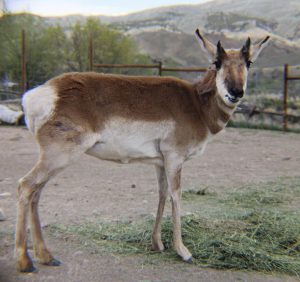 Sex: Male
Birthday: March 31, 2013
Wendell came to Zoo Idaho from Idaho Fish and Game on January 13, 2014. Wendell was being raised illegally on a dairy farm in Bruneau, Idaho. The family had taken Wendell out of the wild as a fawn. Wendell is a non-releasable pronghorn due to imprinting. 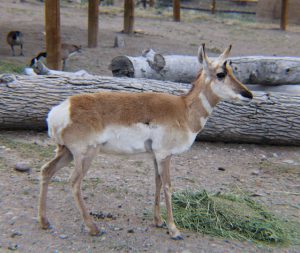 Sex: Female
Birthday: June 17, 2015
Izzy was born at Zoo Idaho to Buck and Elizabeth. She adapted well into the herd and can be seen running along the fence following guests. 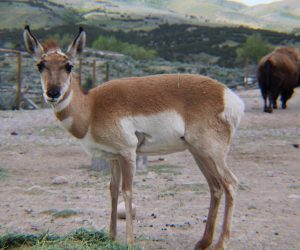 Sex: Female
Birthday: June 4, 2018
Thrud was born at Zoo Idaho to parents Buck and Elizabeth. She enjoys running and playing with her brother Kota. 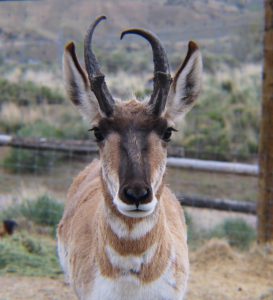 Sex: Male
Birthday: June 4, 2018
Kota was born at Zoo Idaho to parents Buck and Elizabeth. He is full of energy and very curious. He enjoys investigating zoo guests.

Sex: Female
Birthday: April 15,2017
Weisie was transferred to Zoo Idaho from Idaho Fish and Game as a rescued non-releasable pronghorn. She was found in Weiser, ID being kept illegally on a farm after the family found her as a fawn.

The pronghorn is endemic to North America and is distributed throughout the plains, basins and deserts of western North America from the southern prairies of Canada to northern Mexico. Pronghorn are primarily found in grassland, sagebrush steppe, chapparal and desert habitat.

Pronghorn are small barrel shaped ungulates with dense coarse hair. The upper body and outside of the legs is a tan to reddish tan color; the belly, inner legs, cheek and rump patch are white. Males have a broad black band from eyes to snout and a black neck patch. Both male and females have horns. Males have large forking sheaths covering their horns that are shed annually. The sheath is lyre shaped with a pronounced short prong that juts forward. Pronghorns are specialized for cursoriality (running), resulting in enhanced speed, endurance and the inability to jump. They are the fastest known New World mammal with a maximum burst of up to 60 mph (90 kmph) with sustained speeds of 40 mph (65 km/h).

Pronghorn are herbivores eating stems, leaves, grasses and shrubs. Sagebrush is a particularly important component to their diet.

Pronghorn live between 9-16 years in the wild and captivity.

Pronghorns are polygynous with males defending territories and a small harem of females from March-October. Breeding occurs mid-September through October in the northern range and July-October in the southern range. Gestation is 252 days and births are synchronous with all females in the harem giving birth within a few days of each other. Typically females give birth to single fawns in their first year and twins in the subsequent years. Young are partially weened by three weeks and become sexually reproductive by 16 months old.

Herd composition changes daily, even hourly when food is plentiful. Groups referred to as bands of 3 to 25 are spatially distant but still within visual contact of one another. In fall and winter bands come together to form larger herds (up to 1,000) as protection from predators. The size of bands are influenced by differences in quality of habitat and density and spatial dispersion of individuals.

Dominance hierarchies are maintained by female bands, bachelor bands, and territorial male bands that contain more than one male.

Threats to the pronghorn include reduction of available habitat, fragmentation of habitat, livestock grazing, roads, fences, other barriers, insufficient forage and water, and lack of herd recruitment.