Sex: Male
Birthday: September 5, 2006
Shooter was relocated to Zoo Idaho from Utah Fish and Game on June 5, 2008. Shooter is a bull elk that was raised in captivity.

Sex: Female
Birthday: April 30, 2009
Frieda came to Zoo Idaho as a non-releasable orphan from Idaho Fish and Game in June 2009. Frieda was bottle fed and raised by Zoo Idaho staff.

Sex: Female
Birthday: May 29, 2012
Ellie was captive born at Zoo Idaho to Freda and Shooter. She was reared successfully by Freda.

Sex: Female
Birthday: October 23, 2014
Chicklets was wild born and transferred to Zoo Idaho from Idaho Fish and Game. Idaho Fish and Game picked up Chicklets from a private residence, who was raising the calf as their own. Chicklets is a non-releasable calf because she became imprinted by the family who removed her from the wild. 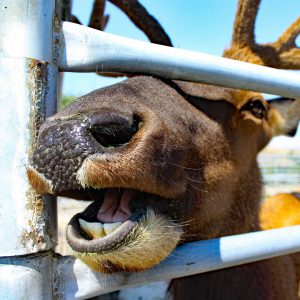 Sex: Male
Birthday: March 7, 2014
Big Bob was hand raised by a family in Idaho and became imprinted. Idaho Fish and Game became aware of the situation and transferred the non-releasable elk to Zoo Idaho. Big Bob is imprinted to humans and enjoys interacting with zoo guests. 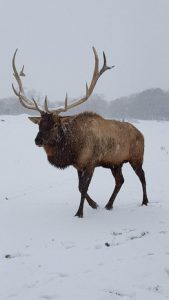 The zoo received Shooter in 2010 from Zootah in Logan, Utah.

There are four extant subspecies of elk found in North America. The Roosevelt elk (C. elaphus Roosevelt) is the largest and ranges along the Pacific coast from northern California to Washington and Canada. The Rocky Mountain elk is the second largest elk subspecies which Idaho has the third largest population behind Montana and Colorado. The Manitoba elk (C. elaphus manitobensis) are found primarily in the provincial and national parks of Manitoba and eastern Saskatchewan however they were once found along the eastern edge of the Rocky Mountains through Colorado. The smallest subspecies, tule elk (C. elaphus nannodes) once roamed the valleys of northern and central California and are now managed by state and federal agencies on California public land.

Elk are one of the largest members of the Cervidae family. Elk have a dark reddish hue during the summer and a lighter grayish hue in the winter. Elk also have clearly defined buff colored rumps and small tail. During winter elk grow thicker hair and a thin neck mane that shed by early summer. Only bull (male) elk have antlers. Antlers are shed in early spring and grow throughout the summer. While actively growing antlers are covered by velvet, a highly vascularized soft layer of skin. Velvet is shed once the antlers are fully developed.

Elk are primarily grazers, feeding on native grasses supplementing on forbs and tree sprouts in the summer and tree bark in the winter.

Elk live up to 15 years in the wild and 20 or more years in captivity.

The mating period for elk begins in early September and typically runs for 10-12 weeks. The period is known as the rut where mature bull (male) elk compete for and defend a group of cows (female) called a harem. Female elk are sexually mature at age two and have a short estrus cycle, 1-2 days. Gestation is 240-262 days usually single birth with calves weighing 35 lbs. The calves are spotted when born. Calves are fully weened by two months and will remain with their mother for nearly one year.

Elk are gregarious and remain in herds throughout the year. Herds are not consistently composed of the same individuals. Habitat, predators, forage, population density, breeding activities and weather influence herd patterns. Cow groups however tend to be more cohesive than bull groups. The largest groups tend to form in winter and early spring. During the spring migratory elk will disperse into smaller groups as they reach intermediate elevations and yearling and 2-year-old males tend to leave joining bull groups once calving starts. In the fall individual herds begin to form large herds for rut which then break into smaller groups as male seek out and defend cow groups or harems.

The primary threat to elk is hunting and predation. Other sources include diseases, parasites and malnutrition due to weather conditions, food supply and food quality. Primary predators include American black bear, grizzly bear, cougar, gray wolves and coyotes.