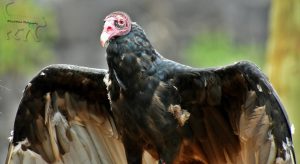 Sex: Male
Birthday: April 22, 2014
Horus was transferred to Zoo Idaho from Medina Raptor Center in Spencer, OH in August 2015. Horus came to the rehab center with a fractured left humerus and spinal trauma. After the humerus healed, Horus still had significant limitations in movement. He was deemed non-releasable and transferred to Zoo Idaho as his permanent home. Horus is one of our education raptors and enjoys visiting school groups. 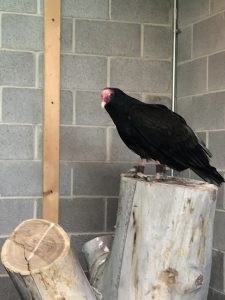 Sex: Male
Birthday: April 15, 2014
Zoo Idaho obtained Beaky from AWARE Wildlife Center in Atlanta, Ga. He came in with a fracture of the right radius and ulna bones and is a non-flighted turkey vulture. Zoo Idaho became his forever home in May 2015.

The turkey vulture is found from the southern border of Canada to the southern tip of Chile. They occupy a diverse range of habitat from forests to open environments.

There are six subspecies of turkey vulture that vary in size. Male and female do not differ. Turkey vultures have brownish black plumage with a bare neck and head. The color of head and neck varies from pink to bright red.

Up to 17 years in the wild and slightly longer in captivity.

Breeding occurs from March to June in North America. Turkey vultures participate in courtship rituals that involve several birds on the ground hopping in a circle with wings partially spread. During flight a male might follow closely flapping wings and diving. Turkey vulture are monogamous with the pair-bond lasting through the breeding season and sometimes all year. No nest is built instead eggs on bare surfaces in protected locations such as cliffs, caves, rock crevices, burrows, and inside hollow trees. One to three, with two being common, eggs are laid. Both parents incubate and feed. Chicks are hatched between 30 to 40 days, fledged within 10 to 11 weeks, and remain with the group until fall.

Turkey vultures are gregarious roosting in larger groups but search for food independently during the day. Northern populations migrate during the winter. Turkey vultures do have home ranges that vary in size depending on the availability of food. The home ranges are not defended. Turkey vultures have a keen sense of smell that is used along with eye sight to locate carcasses. As a defensive mechanism they will regurgitate semi-digested meat that is foul smelling and contains stomach acid that can sting potential predators if it gets on their face and eyes. To cool down turkey vultures will defecate on their legs, using the evaporation of the water in the feces.

Poison in carcasses, lead, vehicle collision, electrocution from power line strikes, starvation due to immediate removal of carcasses especially along roadways, and persecution due to cultural superstitions.